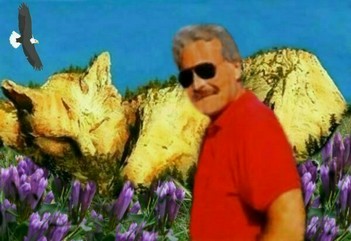 He  is also a veterans’ advocate, environmentalist, animal rights activist, animal rescue worker, and proud member of The World Wildlife Fund, The National Wildlife Federation, Defenders of Wildlife, The Humane Society of the United States, The American Society for the Prevention of Cruelty to Animals, and Alley Cat Allies.

Ed has published six nature, historical fiction, and animal related books, and his Katrina book, Through Katrina’s Eyes, Poems from an Animal Rescuer’s Soul, is the recipient of the 2006 Merial Corporation Human-Animal Bond Award. His animal memoir, Curious Creatures – Wondrous Waifs, My Life With Animals, was awarded a Certificate of Excellence in the 2004 International Cat Writers’ Association Communication Contest.
And his latest book, Where The Redwing Sings, is dedicated to today’s children – Earth’s only hope for a better tomorrow.  It has recently won the Poetry Category in the 2009 Green Book Festival.

He has been interviewed regarding his veteran and animal advocacy work on several radio stations; on nationally syndicated All Pets Radio; and on the National Progressive Radio Network.

Ed was also awarded a 2004 True Grit Award by GRIT Magazine for his veteran and animal advocacy work, and several of his Katrina animal rescue poems can be found on http://www.allpetsradio.com

His tribute to the animals of the world, and for our need to help preserve nature and Earth’s wild animals for future generations to come can be found at: http://www.myspace.com/edkostro

And many of his cat related articles, stories, and poems can be found at: www.thedailymews.com/edkostrointro.htm

Ed currently resides at haunted old Thornwood Manor with his lovely wife, Rebecca, several adopted pets, and several more that he rescued in the devastation of Hurricane Katrina.

Tags
Previous Article
Live Longer – Get a Pet!
Next Article
The Legend of St. Patrick
PetsWeekly, 2021 ©All rights reserved.